We left Klang's Little India very happy although we're now late on schedule. We had to skip visiting the Blue Mosque in Shah Alam to make up for the lost time. Most of us took the opportunity to sleep during the bus ride to Sunway Lagoon Water Theme Park before spending a fun and wet afternoon there. 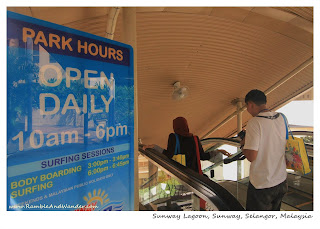 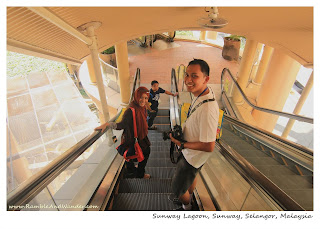 Upon our arrival and after all the obligatory photo takings by and of couples like above, we were first given a briefing by an officer from Sunway Lagoon. Top of the agenda was to have a look around their latest water theme park attractions, which are Vortex Water Ride and Waterplexx 5D, built to commemorate 20th anniversary of Sunway Lagoon.

These latest attractions are the world’s largest and first, respectively.

Looking at Vortex Water Ride structure however, I don’t think I would have been brave enough to give it try if it had been opened on the day. You slide down in a big tube (purportedly the largest in the world) and then you free fall into the vortex where I imagine you’d be sliding round and round some more inside the vortex before it all ends. An adrenaline junkie? This is definitely for you.


Waterplexx 5D is undeniably more sedate compared to Vortex Water Ride, heh! It is essentially a 10-minute 3D movie complete with moving seats and additional special effects such as water splash, gusts of wind and strong gales that would engage viewers’ senses of sight, sound and touch. Well, viewers’ senses were engaged alright. There were screams (from other viewers, not from me, of course!) throughout the show, and this being a water theme park, rest assured there’s no way you can get out of the hall in dry clothes (and dry hair).

Carrying a bulky camera, I didn't do much of the water activities but I did take some photos of the group having a splashing sexy time in the water. Sorry but I won’t upload them here to respect their privacy. In compliance with this blog's rating, I guess you guys just have to make do with the following PG-rated photos of Sunway Lagoon, ha ha! ;-)

Obviously one hour is not enough when you’re having fun. What more when the theme park is huuuugggge with plenty of attractions that should cater to everyone in the family and one's circle of friends. I would definitely come back here again soon! It is highly recommended that you spend a whole day or at least half a day if you ever decide to come to Sunway Lagoon.

If you need a locker, there’s a locker service using a token that would cost you just MYR5. The locker is not that big although you can easily squeeze two laptop backpacks and a DSLR into it. I know this because that's exactly what Winny and I did. We split the cost so each of us paid only MYR2.50 for the locker. Yeah, cheapskate, I know. :-)

There's another locker service (over the counter) but it costs a lot more. Like really a lot more. MYR35, if I'm not mistaken.

It was a fun afternoon but unfortunately it was marred towards the end when Tahid found out just as we were getting ready to leave that he had lost his wallet and mobile phone in the changing room. Not exactly a good start to the programme considering that we still had 3 days to go.

So folks, do be careful and keep an eye on your belongings at all times. Having said that, this advice shouldn't apply just at Sunway Lagoon but also wherever you may go. While I can only imagine how Tahid must have felt having lost his stuff, I must say that I admire him for not letting it affect him much from enjoying the rest of MSS2013 programme.


For more information on Sunway Lagoon, check their website: http://www.sunwaylagoon.com/