Built on an artificial island, Doha's Museum of Islamic Art really is a sight to behold, especially against the backdrop of blue skies and blue waters of Doha Bay.  Created by the same guy who came up with the glass pyramid at the Louvre in Paris, the Museum was designed to incorporate both traditional and modern Arab and Islamic cultures into its architecture.  These elements can easily be seen throughout the building although they appear to have been kept as simple as possible, possibly with the idea not to distract the attention of its visitors away from the exhibits being shown in the Museum itself.  The end result is a very unique piece of architecture, simple but still very visually striking, both from the outside and in the inside.

Let's take a tour of the building first... 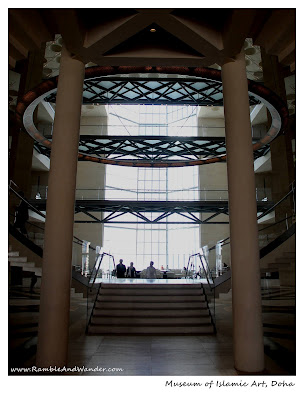 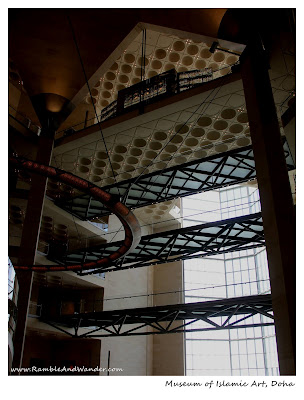 Upon entering the Museum and after getting the (free) ticket, visitors are greeted with a huge staircase behind which there is a large open space concourse and atrium.

The circular grand staircase is designed to resemble an oyster shell in recognition of a traditional industry in Qatar, pearl diving. Okay, I know, this doesn't actually look like an oyster shell but we shall see it in a moment.


(Above) The large open space in the atrium of the Museum is mostly occupied by a cafe that offers an impressive view of the skyline of Doha.

(Below) Turning around from the cafe and facing the entrance again, one will now notice the shape of an opened oyster shell that is made up of the staircase and the chandelier. 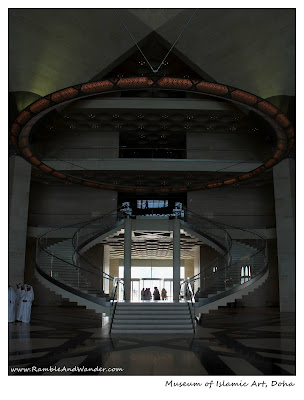 Looking up the atrium at the ceiling (with its Islamic motif design), which allows natural light into the building. 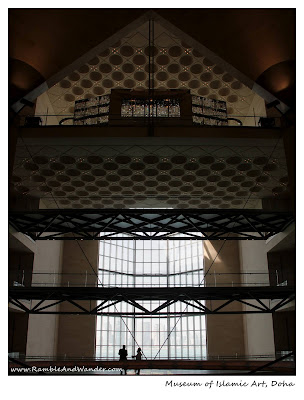 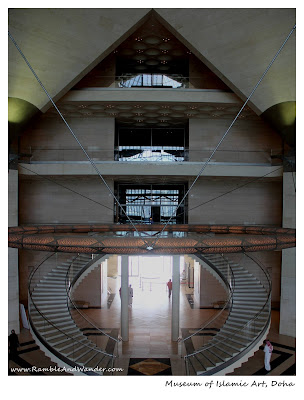 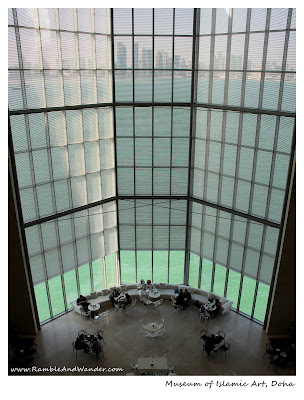 Views from one of the bridges towards the staircase (left) and cafe (right).


So what do you think of the architectural aspect of the Museum?

---
Next entry: The exhibits at the Museum (Please click here)