According to Wikipedia, Museum of Islamic Art in Doha boasts "one of the world's most complete collection of Islamic artifacts" with items originating from all over the world including Spain, Egypt, Iraq, India and Central Asia among others. Some of these have been collected over the years way before the Museum was even built. These days, most of these artifacts are displayed beautifully in various galleries which are located on the first and second floors of the Museum.


Each gallery has its own theme based on either a subject or topic, an area or a period. The first floor galleries have displays on patterns on Islamic design, calligraphy and science. Here you can find early copies of the Holy Quran handwritten in the 7th century, as well as illustrations and manuscripts from countries like Iraq and India.

The second floor galleries are set based on a chronological order of history of Islam. They cover a whole spectrum of Islamic world from 7th century to around 18th century. The exhibits on this floor include coins, weapons, jewellery, clothing, carpets and ceramics, among others. Some of the exhibits are shown below. 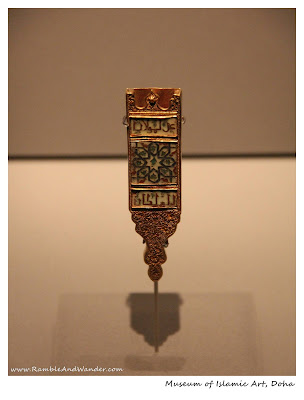 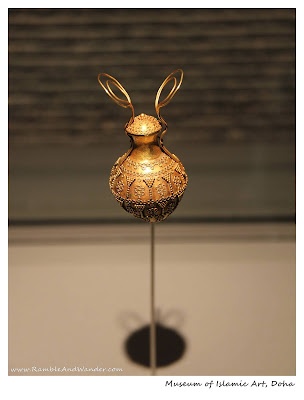 Apart from having a huge collection under its belt, the Museum also has a library that is opened to the general public and features a great selection of books and periodicals related to Islam and the Middle East.

The Museum of Islamic Art by the way is one of over 50 museums all over the world which have started a collaboration with Google through an exciting programme called Google Art Project to give the opportunity and access to everyone to enjoy and explore the many collections available in those museums via online. You may thus check Google Art Project website for more photos of the collection available at Museum of Islamic Art, Doha.