Muhammad showed me where my cabin was in the train coach although I think I did tell him that I should be able to work out the platform no. and the coach no. in Persian as the characters are the same as the characters of digits in Arabic.


I suppose I must have looked not so confident when I told him that.

The cabin was fitted with a 3-tier bunk bed on each of the 2 sides of the cabin. When we got there, there were already four men (who appeared to be locals) who had occupied the lower 2 bunk beds on both sides, leaving me with no option other than to go for the top one.

Each of us was supplied with a bag containing freshly laundered pillows, pillow covers, a bed sheet and a blanket. We were also given a bottle of drinking water each. It was already late in the evening and everyone was getting ready to go to sleep. I had actually half-expected that there could be some parties on board – it was New Year’s Eve, by the way – but it was quiet everywhere. I forgot that it’s still the month of mourning, and coupled with the fact that Iranians have a totally different calendar system altogether, Gregorian’s New Year is probably a non-event. Not that it matters, because I haven’t celebrated new year for ages now.

The overnight train left Tehran on time. It was a smooth journey and I managed to sleep soundly, just waking up every now and then to check on the time. 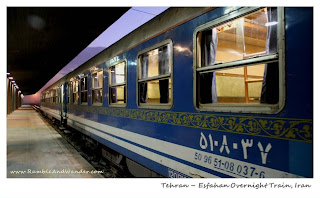 We arrived in Esfahan at the break of the dawn of the New Year. I went into the station hall looking for someone with a placard that carries my name as I had arranged for a hotel pick up.

There was no one waiting, however. I thought maybe the train had arrived a bit early so I waited for a bit. And I waited. And waited. For about one hour... ﻿

There were a few guys who approached me asking if I needed a taxi. Not sure if they’re taxi touts. I nevertheless asked one of them how much it would cost me to go to Safir Hotel. He brought me outside to a taxi booth where there’s a guy who told me how much the ride to the hotel would be. Not knowing other better options, I agreed, got into the car and went to the hotel. It was still early in the morning but thankfully the receptionist checked me in into a room right away. And as soon as I got to the room, I fell asleep. Right until afternoon...

I woke up debating whether to go and see Imam Square first or walk a bit to Zayandeh River and see the bridges.

The bridges won and won me over they did.

Although in some areas the river appeared to be dried up, the walk along the river was truly, deeply satisfying in a way that I can’t really describe. The sights there are just mesmerisingly beautiful. Serene and peaceful...

It’s just one of those places that you have to be there yourself to understand the feeling...