Italy: Postcards from the Vatican


Regarded possibly as the holiest Catholic site, St. Peter's Basilica has the largest interior of any church in the world. The construction of the current building started in the early 16th century and was only completed more than 100 years later. Visitors tend to come to this place either for pilgrimage (especially for those of Catholic faith) or for Michelangelo’s work or for the famous Vatican Museum and/or history or just for the sake of being able to say, “Hey! I have been there too!” ;-) Guess which group of visitors do I belong to? Answers on a postcard from the Vatican, please.... thank you :-)

To get inside the Basilica, visitors would have to join one of the long queues and pass through the security check. Once inside, one would have to observe certain unwritten/ written rules like no hats/caps, silence, respectful, etc.  In my excitement to take a photo of a wall in one area within the Basilica, I incidentally found myself being shouted at by one of the “people of the cloth” for turning my back on one of the tombs of while taking the photo. Okay, maybe I got it wrong, because the guy was shouting at me in Italian and I only understand Latin *cough cough* but he kept pointing at me and at the tomb behind me on which there lays a body of someone holy/ important (considering the fact that the body is "mummified" and kept in the Basilica). It was embarrassing alright turning around upon hearing the shout and only to find out that it was targetted at yours truly. Felt like thousand pairs of eyes fell upon me, ready to pass their judgement for being disrespectful. Felt like the security guys would come for me right there and then to escort me outside :-S

After mouthing a silent “sorry” but not before having to endure the cold stare of the guy which lasted for what felt like hours, I moved on to other areas within the Basilica, making sure not to make the same mistake again while at the same time feeling sure the guy was right behind me just to catch me the second time around... :-D


Both the right hand side and left hand side semi-circular colonnades more or less represent the arms of the church reaching out to welcome its communicants.

Rooted in Swiss mercenaries practice and founded in early 16th century, the recruitment for the Swiss Guards, who are responsible for the security of the Pope, is arranged through a special agreement with Switzerland. All recruits must be of Swiss citizenship, Catholic obviously, unmarried males between the ages of 19 and 30 who have completed their training with the Swiss Army and be at least 175 cm in height.

More than 500 years old, the museum is recognised as one of the greatest museums in the world for its treasures. And it was closed on the day I was there. One word: C R A P ! :-( One can by the way get to the Sistine Chapel through here and see possibly the most famous painting by Michelangelo on the chapel’s ceiling. You guys know which painting I’m talking about, right? Again, answers on a postcard, please...


This photo was taken from Via della Conciliazione which runs from Tiber River to St. Peter's Square. This grand avenue was constructed by Benito Mussolini, the Italian Prime Minister at the time the Vatican City was established.


﻿The place is now a museum although it was originally the site of mausoleum for the Roman Emperor Hadrian and his family in the 2nd century. The current castle structure however was only built in the 14th century. Those who have watched Dan Brown's "Angels & Demons" would probably remember this place from the movie :-) 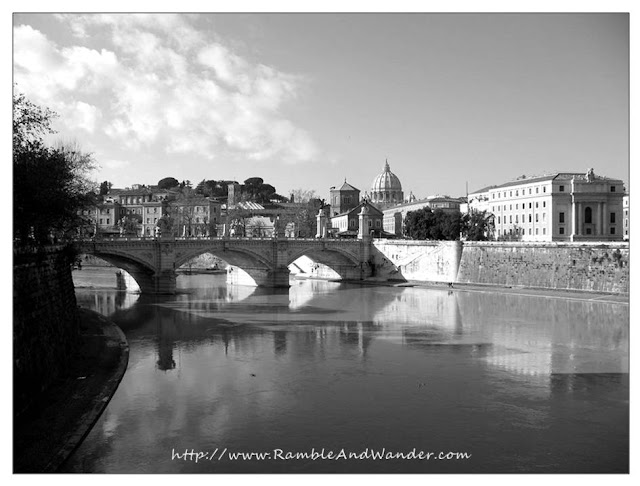