The flight on Iran Air from Esfahan to Shiraz was a short one. I was seated in the fourth row from the front and was probably the only non-Iranian in the aircraft that evening. There was a big burly guy at the front of the cabin who sat facing us, passengers. He was dressed casually and didn’t do anything much, so I figured he couldn’t really be an aircrew. Thought he might be a security guy because he kept staring at me before we took off. A nervous flyer suddenly was made to feel more nervous. I thought that’s not good. If I were to look more nervous and restless, he might become more suspicious of me, and consequently, he might continue staring at me. And I would get more and more nervous and restless. It’s like a vicious circle, which would probably end up with me being stopped and questioned again.

Alas, it was all in my (nervous) mind. Nothing happened. The flight was a smooth one. I was surprised we were even served with a packed meal (a beef burger, 2 packets of flapjacks and a small carton of orange juice) during the less-than-an-hour flight.

My guide/driver was already waiting for me when I arrived at Shiraz Airport. We went straight to Eram Hotel where I would be staying at for the next 2 nights. I went to sleep as soon as I got to my room, in anticipation of an early morning start the next day.

Shiraz is one of the largest cities in the south of Iran. It’s the capital of Fars Province and popularly known as the city of poets and literature. In fact, the tombs of its popular poet and literary figures like that of Hafez, are one of the main attractions in Shiraz. A literature illiterate that I am, I didn’t come here for the tombs though. I came for its Necropolis and Persepolis, or what locally are known as Naqsh-i Rustam and Takht-e Jamshid, two archaeological sites dated from 3,000 years and 2,500 years ago respectively.

The morning came, and after breakfast, we drove out of town for about 80 km to our first stop of the day: Naqsh-i Rustam. The view along the way is that of barren land and agricultural land, interspersed with each other, with a beautiful mountain range that sits quietly in the background.

With sceneries like these, the long drive didn't feel that long at all.

Naqsh-i Rustam is so called because it literally means “Picture of Rustam”, based on an image dated from 1000BC that was found in the area. Rustam is a mythical hero in the Persian culture, made popular by a famous 10th-century Persian poet, Ferdowsi.

Located in Naqsh-i Rustam are 4 tombs belonging to the kings of Achaemenid (from 500BC to 300BC). These tombs were carved out - not dissimilar to the tombs found in Petra, Jordan - and appear on the facade like a cross, locally known as Persian Cross.

Whatever there was in these tombs before this, however, are long gone as they were reportedly looted by Alexander the Great following his conquest of the empire.


A few steps in front of these 4 tombs is a cube-like architecture known as Ka'ba-ye Zartosht, dated from around 500BC. Nowadays, it is believed to be the actual tomb of Cyrus the Great, who’s the founder of Achaemenid Empire. 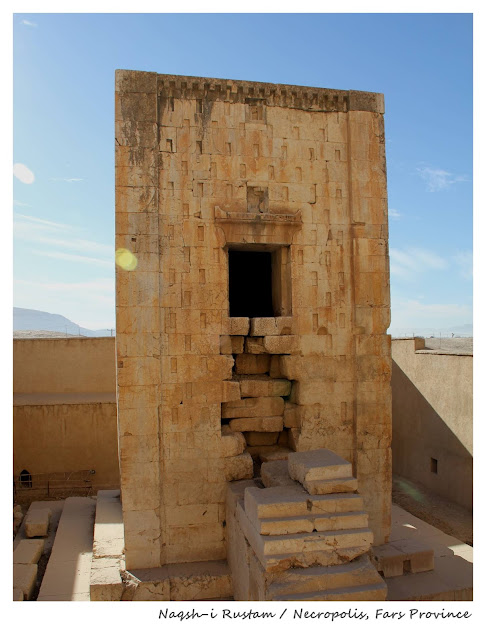 Apart from these tombs, there are also 7 major rock reliefs that were added/ created during a much later period, i.e. 200AD to 300AD period, depicting events involving Sassanid rulers. Most of them were carved out below the 4 tombs.

Three of these major rock reliefs are shown here.


Next stop: Takht-e Jamshid, the place which, in my opinion, is much better than the Acropolis in Athens, Greece.